Well known as the source of the Amazon, the mighty Apurimac makes its boldest statement in the bowels of the Acombamba Abyss. It is here that the river makes its final plunge to the jungles below. Starting in the highlands of Arequipa the river flows in a northwest direction forming the borders of the department of Cuzco to the east and both Apurimac and Ayacucho to the west.  Below Puente Cunyac and the popular 4-day stretch of commercial  whitewater, the Apurimac begins a thundering descent into the chasm formed below the snow capped peaks of  Salcantay and Quishar which form the backbone of the Cordillera Vilcabamba. 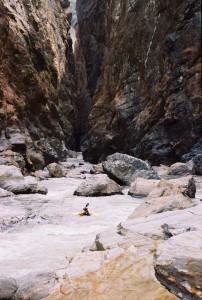 The run features several days of relentless, big, pushy whitewater in a spectacular vertical walled canyon. Hot springs and the ruins of Choq’equirao are several bonuses to this spectacular whitewater odyssey. The river is runnable in the dry season from July to the end of October.

The put in for the Abyss is the normal take out for the commercial Apurimac stretch at Puente Cunyac, which lies along the Cuzco-Abancay highway. At an elevation of 1850 meters the river corridor here is dry and arid as it lies in a rain shadow of the Andes. The information below was compiled from a five day kayak only trip that began on October 26, 2001. The flow of the river at the put in was estimated at 2000 CFS .

The put in is at either Puente Cunyac (KM 0) or 12 km downstream at a hot springs called Banos Cconoc. A day by day summary is as follows:

Day 1 12 KM of class 2 boating to the Banos Cconoc (2-3 hours) and 20 additional KM to entrance of river on right at beginning of horseshoe canyon at 1680 meters.

Day 3 5 KM with huge drops containing house sized boulders. Several portages and many rapids run down small channels rather than out in the meat. Finish at 1460 meters.

Day 4 21.5 KM of boating to 1235 meters with some huge rapids and at least one portage. Passed the Quebrada Arma the walls of the river become completely vertical with several unportagable and almost unscoutable drops.

Day 5  25 KM of big water boating to Puente Pasajes which lies just beyond confluence with Rio Pachachaca. From here one can hitch a ride in a truck to Andahuylas (12 hours away) but beware there is little to no traffic on this road. At Pasajes the river is over 4000 CFS with the added tributaries.

From this point one can continue 1-1/2 days downstream for an additional  70 km of boating to the village of Villa Virgen where a motorized river boat (Pecky-Pecky) can be hired for the 50 KM (4 hour ride) to jungle town of San Francisco which lies at 700 meters above sea level. In San Francisco buses can be found for 12 hour ride to Ayacucho. Although we elected not to run this last stretch it has been described to me as  containing Grand Canyon style rapids with surrounding jungle vegetation. The sounds of birds and monkeys echo through the canyon. Long pools are followed by substantial drops . People and villages start coming into view. If you run this lower stretch be aware of the dangers of Malaria and Dengue which are found at this sub 1000 meter climatic zone.