The Colca River lies deep in the heart of Peru’s most famous Canyon. First Pioneered by the Polish expedition Canoandes in 1981, the Colca has since become a buzzword in the international paddling community. Tourists also flock to the Colca Canyon to marvel at its natural splendor and to experience the culture of the many small villages which dot the canyon rim. One spot that has become particularly popular is the “Cruz del Condor” where visitors have roadside access to a nesting colony of Andean Condors perched on a wall over 4000 vertical feet above the river. 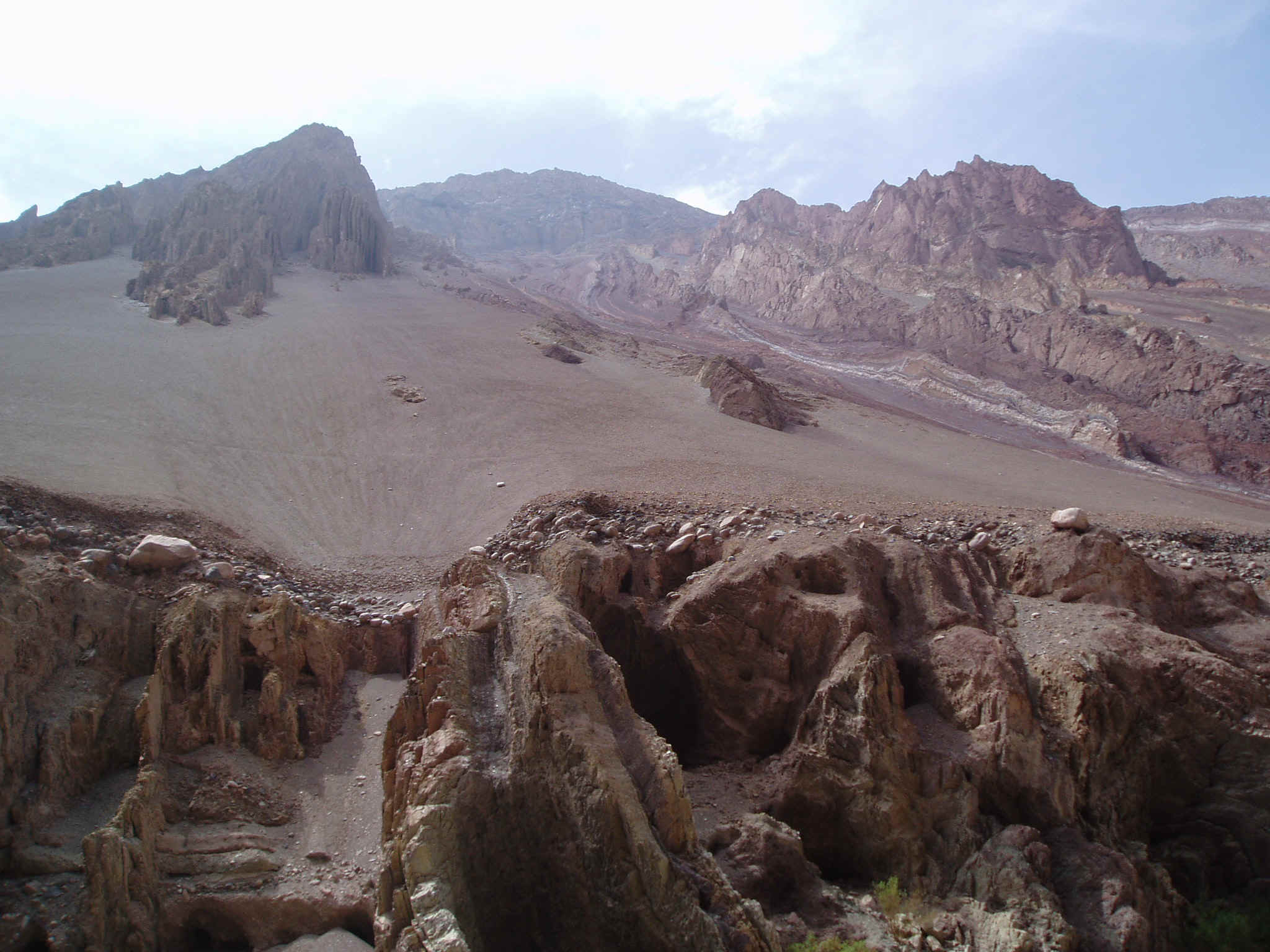 There are multiple and distinct runs on the Colca, which vary in difficulty and with the season. From January to April the river is at its highest level and there is a 3 km, class V+ section that can be run from approximately 1 km above the “La Calera” hot springs to 1 km above the town of Chivay approximately 3675 meters above sea level. Duilio Velutino, Gian Marco Velutino and Robbie Dastin did this section during the high water created by the “El Niño” rains in March of 1997.

At the same time of year another approx 10 km stretch can be run from Tuti (3800 meters). This stretch is pretty and meanders through cool rock formations with little or no difficult whitewater.

From Chivay to Madrigal the river may be runnable but as far as I know has not yet been explored. From Madrigal to the swinging bridge below Cabanaconde is an unrunnable 23 km stretch that drops almost a thousand meters. 15 cubic meters of water are taken out of the river above Chivay. This water passes through the canals on the lip of the canyon and eventually plunges back into the Majes valley providing irrigation for some 70,000 Hectares of reclaimed desert and generating electricity for Southern Peru.

From Cabanaconde to Canco the stretch of river is known as the “Upper Colca”. The Poles ran the river once with both rafts and kayaks in 1979. It was described by the Poles as an arduous 44 km stretch that involves more time spent portaging than boating in their 11 day endeavor. The river was not run again until Damen Millar and Russell Kelly did it in creeks boats at the beginning of November 2003 with an estimated flow at Canco of 400 CFS. The run is very good expedition style boating with some 5-6 reasonable portages in the 2-1/2 day stretch to Canco. Damen’s suggestion is to hit this section while it is low (July-October) and beware of the rains which usually come at the beginning of November. To reach the put in hike 2 hours from Cabanconde down into the canyon with burros and start the trip at the “OASIS” which lies on a popular tourist trek. Cabanconde is at 3460 meters and the put in for this section is at 2200 meters. The average gradient throughout the 44 KM stretch is 18 m/km. For more information on this stretch of river see Pole’s guidebook titled “In Kayak through Peru” or see River description on this web site.

The section from Canco (at 1400 meters of elevation) to La Central passes through the Lunar Canyon. This 70 km stretch of river is one of the best runs in Peru. The run takes from 3-10 days depending on the group size/strength and if a raft is involved. On the trip you will see condors, black-chested buzzard eagles, nutrias (otters), and scorpions. The no-see-um bugs can be a bit of a drag but are only out at dusk and dawn. Rubbing the leaves of the ever abundant Molle tree onto the skin serves as a natural repellant and keeps the bugs at bay. With an almost guarantee of no rain, no tents are needed on the trip.

The best way to reach the Colca is from Arequipa or Cuzco. There is daily bus service from Arequipa’s central terminal to Huambo. A recommended alternative is to hire a private mini van and driver of which there are many servicing this popular tourist route. A private driver will allow you to take your time and enjoy the views and small towns along the way. The road leaves Arequipa and after passing Yura starts to climb, passing behind the high peaks of Chachani and Misti. The road maxes out on the Altiplano at around 4300 meters and then begins the descent into Chivay. From here the drive becomes very interesting passing such places as Yanque, Cruz Del Condor and the village of Cabanaconde. there are hot springs to visit along this section of the Upper Colca valley.

In Huambo (elevation 3270 meters) begins the 1800-meter descent to the village of Canco. Burros, Mules or horses can be hired in town. Susana Leon who owns the restaurant along the plaza can help find animals. Expect to pay at least 20 soles per animal plus something for the owner who will accompany you to the valley floor and will return with the animals. If you use burros make sure the animals have Cerrones or Cañastas (saddle-like equipment which helps balance the kayaks). The hike to the river takes 6-8 hours and is at least 12 km long . The village of Canco whose terraced fields lie on the banks of the Colca is an oasis in an otherwise desert environment. Canco has fruit trees, turkeys, cows and sheep, but most importantly “HOT SPRINGS”. Usually there are small bathing ponds on river left but if you swim across the river there is where super-hot water bubbles out of a spot right below the huge cliff on river right.

The river is very small at the put in at Canco and does not pick up volume until the Mamacocha river doubles or triples the flow with warm water. The best time to run this stretch is from Late May to late June when the flow is 1500-2000 CFS.. The river has been run commercially from July until the rains arrive in early November but scratchy flows of 700 CFS are not as exciting.

It is 3 km from confluence of the Mamacocha to Ayo, where the tiny Río Ayo enters on river right.

From Ayo it is 6 km by river to where the tiny Rio Jasmin enters on river left. In this section before the Jasmin there is one great several KM long class 4 rapid. Just below the confluence of the Río Jasmin is 4 km stretch of class 4 water which includes Canoandes rapid which was once class five but has changed and mellowed to a class 4+ rapid. At the end of this lies “Ducha Del condor” which is where a small waterfall cascades several hundred meters off of the left wall and is nothing but mist as it reaches the river. Looking up the left wall beside the falls is a ledge with nesting Condors. In the late afternoon the birds all return to the nesting area and make passes through the water mist as if it where a shower. A huge flat rock ledge on river right is a great place to get out and camp or at least watch the birds.

From “Ducha Del condor” there is 6 km of fun class 4 whitewater to Satay where the Quebrada Gloriahuasi enters on river right. This stretch also contains several calm stretches where the vertical walls have outstanding geological formations. Two km below Satay is the beginning of the “Chocolate Canyon”. The Chocolate Canyon is one of the coolest places on earth. Towering walls is many different color patterns dominate the skyline. Some great camps can be found in here as well.

The 8 km stretch through the Chocolate Canyon and up to Reparaz contains a lot of 4+ whitewater. Reparaz gets the adrenaline flowing as it is impossible to scout and not portagable into you are within its walls. The rapid that lies within the canyon was once a runnable class 4+/5- rapid. In 2005 the rapid changed and the bottom portion is a MUST PORTAGE. You need to enter the canyon on the right side and immediately work your way to the left and get out on a shallow gravel bar and portage equipment between giant boulders on the left which now form a river wide sieve. The move is not very difficult at low flows. I used to recommend running the lower Colca at higher flows in May and early June. I do not think it will be possible to make the portage of Reparaz at higher flows so it will in effect become a death trap. For that reason I would suggest running this stretch from July to Nov 1 until further notice.

From the exit of Reparaz to Green’s Canyon is 4 km of relatively easy whitewater. Immediately after Green’s Canyon is Pole’s Canyon where the rock turns from green to black. This intimidating rapid is runnable at low flows but at normal flows is a definite portage and at higher flows may require you to run the last class 5 part of the canyon.

Once past the Poles Canyon the power of the river backs of considerably. Many times the canyon will start to open but quickly closes again until it finally opens for good just above the confluence with the Río Andamayo. From here one can take out about 5 KM below where a concrete flume brings some water into the river. A road on river right has combis that run on fairly regular interval to Aplao where buses to arequipa can be located.

As an option continue downstream approximately 20-25 km with easy, fun whitewater to the take out at the swinging bridge of La Central. On one trip in 1994 we camped alongside the road at LA Central and caught the 5:00 AM bus to Arequipa. Another option from La Central is to hitch hike a few km up the road to the Majes River Hotel and spend the night with the “boater friendly” owners.

A high water option for rafting and for beginner kayakers is to start boating above La Central and make the journey to Aplao or onward to Punta Colorado or even the city of Camana itself.