Without a doubt the Río Maran is the most difficult and demanding multi-day trip in Peru. The river has 5-6 days filled with class 5+ whitewater in a remote vertical walled canyon. Simply getting to the river is an adventure by itself. The reward is one the most spectacular kayak trips on the South American continent. 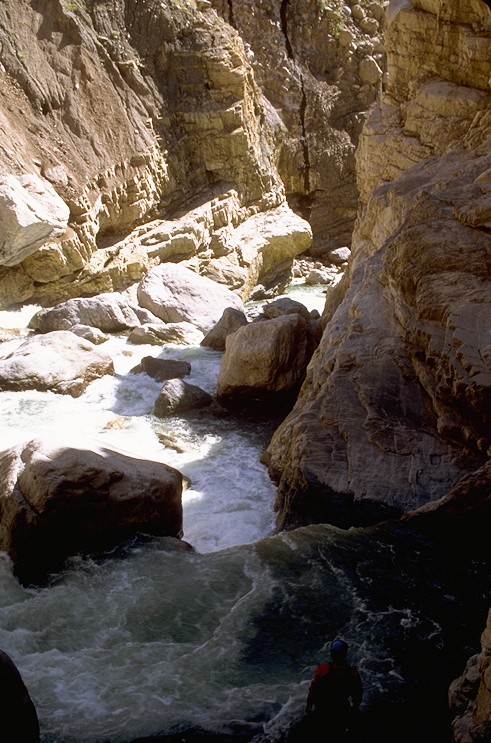 The River was fist run in 1995 by John Foss, Eva Luna Ramirez and Jon Barker who put in below the town of Lampa. In May of 1996 I ran the river with Mike Savory of New Zealand. Mike and I avoided a 1-1/2 day walk into the canyon by putting in upstream at the Village of Vilcar. We were rewarded with an additional day of 5+ boating and a simple put in alongside a bridge.

The Maran River starts in the department of Ayacucho and flows off the western flank of the Andean Cordillera. Upon joining the Cotahuasi the combined flow is called the Rio Ocoña which is Peru’s largest river flowing into the Pacific Ocean.

This is a wilderness Class 5-6 river trip of outer limits proportions. Once you enter the canyon there are few if any bailout possibilities. The window for running the river is very narrow from approx May 15 to June 5th depending on snow pack. The runnable flow of the river is approx. 700-1250 CFS. There are several arduous portages and hundreds of class 4-6 rapids. Topo Maps of the region are a necessity and are available from the Geographica Militar in Lima. One can take out in Iquipi at 400 meters of elevation or continue to the Pacific Ocean (Ocoña 0 meters of elevation) which involves an additional 50-60 Km of paddling class 2-3.

To get to the river from Lima take Etigsa or Alva (Depot location in Lima is Emilio Sabastian Barronca 109 phone 238168) bus lines to Pausa and then on to Marcabamba/Vilcar. The bus in Lima can be found in “La Victoria” section of the city. It is roughly 25 hours from Lima by direct bus but can take up to three days if the direct buses are full or not running and combinations of buses are used. Approximate cost 35 Soles. If you have your choice take the Etigsa bus as it does not stop in Marcabamba but continues on to Sequello to serve the people of the upper valley. Tell the driver you want to get off in Vilcar. As the bus passes Marcabamba it descends rapidly down into the river valley. Get off at the junction to Vilcar/Colta and carry your boat down to the bridge at the river. Bring 7-10 days worth of food with you from Lima, as there is no food available from this point on except for some orange trees you may find along the river 6-7 days below.

On our trip the bus arrived near to the bridge of Vilcar (elevation 2275 meters) at 12:30 in the afternoon. We were on the river by 1:00, which starts with the name of Huanca Huanca and meanders gently through basalt bluffs. The river starts to get progressively more difficult and 9 km below Vilcar is the first portage. At this point (2150 meters) you are approx 1000 vertical meters below the town of Lampa. We found a small beach with enough sand for two people and plenty of firewood.

The day starts with a bang. The first ¾ km of river completes a bend in the canyon to the west and is full of non-stop action involving 10 distinct class 5 rapids in tight sequence. This section drops at 60 m/km and we had two short portages. When you come to a massive rock in the center of the river that resembles a skull it is time to get out on river right and carry your boat up to a faint fishing trail 30 meters above the river. It is here that the river enters a series of sieves and a micro canyon with vertical walls. We arrived here at 9:30 in the morning after an 8:00 AM start. The next four hours were spent making a ¾ km portage on the right side of the river. After some rest we ran one drop and got out to scout the canyon from the left. We could see one beach 50 meters below us on the right so we got back in our boats and made camp there at 3:00 (elevation 2050 meters). Note: it gets dark in the canyon often by 4:00 PM. Before cooking dinner we crawled thru a hole in a rock in an effort to get a view of where we would put on in the morning. We could see that a massive rock had fallen in from the vertical right wall and crossed over half the river. We would have to paddle underneath the overhanging rock in the morning and hope to find an eddy on the other side.

Huge day of whitewater including two 4 meter and one 5 meter falls. The first 4-meter drop was immediately after passing under the house-sized boulder just below camp. Later we came to a radical, low volume, 5 meter falls with one tight runnable line alongside of two death chutes. The second 4 meter drop came at the end of a complex class 5 rapid that was hard to scout and perhaps impossible to portage. It started with a 2-meter drop on river left then a run along the left cliff face to an eddy in the center of the river. From here it was thru a center chute moving hard right then a hard left draw and paddling hard to the left side of the 4-meter drop.

In total we ran 3 km with 6 portages none of which was too long or heinous. Camp was on a bench on river left at 1890 meters.

Another day with class 4-6 rapids. The first four hours were good boating. Then, after portaging a class 6 rapid we reached an un-portagable rapid that we could not scout nor could we return upstream. The center went into an obvious death sieve that was making an incredible sucking sound that filled the canyon. Neither the left chute nor the right chute was visible from river level but Mike, who had scaled the left wall thought the right would “GO”. We agreed to start 15 seconds apart and drop into the unknown. Mike bashed his elbow going through the first chute and I got stuck in the ledge hole for a 5 second ride which felt like eternity. After passing through the first chute we both made the right decision and punched the next river wide hole on the right. At the bottom we were able to get out and walk up the river left cliff and look at the rapid we had just run without scouting. The time was midday and we continued on for another 1.5-2 km. 500 meters beyond a mini gorge we found an amazing camp on river left. Looking downstream we could see the Quebrada from Pausa entering on the other side of the river. The camp has lots of firewood and unlike most places in the canyon enough sand for 15 people. Within eyesight there is also a big cave with sulfur inside.

In total we ran 8 km with 3 portages one of which involved a 6-meter seal launch. Camp was at 1685 meters.

After leaving camp and passing the Quebrada entering from Pausa, the canyon walls close up and the drops get big. This goes on for 1 km and then the canyon opens for 1 km but again abruptly closes. The entrance to this second canyon has a heinous rapid that is very difficult to scout. We arrived here at 11:30 and started to scout from the left. A portage on the left was not possible due to recent avalanche that left a nearly vertical scree slope. We moved to the right and found a portage route through but were exhausted and decided to camp on the beach on river right at the beginning of the portage.

In total we ran 3 km with several portages. At one point we were again forced to run an un-portagable class 5 rapid that was at the lip of a waterfall that went into an undercut. The move involved crossing from the right side of the river to the left and getting out of your boat and seal launching off the backside of an island in the middle of the river. What made the move so difficult was a huge, river wide hole just upstream of the island. Camp was at 1575 meters.

In the morning we carried our boats to the bottom of a huge wall of driftwood. We were forced to run the lower part of this portage through a chute on river right. We continued the portage around the next section on river right and then came to a bend in the river where we were forced boat to the left side of the river and begin the third stage of the portage on the vertical left wall. This final stage took three hours and involved lining boats along the cliff and then self-rappelling in your boat back into the river. Whoever follows us next into the canyon will be happy to find we left anchors and webbing in the walls. Note: For this section of river it is well advised to have several sections of webbing, a pulley, and several sections of webbing that can be abandoned.

The whitewater continued until the final canyon on the curve just above the entrance of the Rio Oyolo. Luckily this final, vertical walled canyon has flatwater and the added surprise of hundreds of Garzas (Herons). One km after the confluence of Rio Oyolo, which brings in several hundred CFS of water, one comes to Puente Uchubamba. The river has class 4+ rapids which begin to taper to class 3 until one approaches Puente Maran where the river again bumps up to class 4+, 5- in one ¾ km long rapid just above the bridge.

We made camp 1 km below Puente Ocoña at a beach on river left (1275 meters) Apart from the long portage at camp in the morning, which took 4 hours there were no portages.

Leaving camp at 7:00 AM and boating continuously through incredible class 4, granite boulder rapids, allows one to reach the Ocoña by 10:30 AM. This 30 km stretch drops 360 meters or 12 m/km. Here the Rio Cotahuasi doubles the flow to an estimated 2500 CFS. The canyon opens up into a wide arid basin with class 2-4 swift moving whitewater all the way to Iquipi some 6 hours or 44 km downstream.

The village of Iquipe (elevation 400 meters) is a good takeout option as there are micros or daily bus service to Camana for 10 soles. In Camana bus service is readily available to Arequipa for 5 soles. Since my last trip on the Río Ocoña I have learned that a road has been built from Iquipe to the coastal town of Ocoña where the Pan American highway crosses the river.

One can continue paddling downstream to Ocoña and it required another 10 hours of strenuous paddling with some flat-water stretches. What makes this stretch particularly difficult is the cold, coastal fog called Garua and the strong afternoon headwinds.

For the take out of the river:

In Iquipi Take the minibus to Camana for 10 soles which arrives at 5:00 AM and from there buses are available to Lima or Arequipa throughout the day. It is 6 soles from Camana to Arequipa and only 4 hours.