The Rio Chinchipe is located in Cajamarca Province in North Central Peru and has its headwaters in the Southern district of  Zamora Chinchipe Ecuador. It is a rainfed river runnable all year long but ideally in the rainy season which is generally November through May. The size and length of river makes it good for rafts as well as kayaks with days runs or multi day options.

In February 2014 we ran 160 km stretch of river starting near Palanda Ecuador 48 km north of the border (elevation 1050 meters GPS coordinates 4°39’10.14″S,  79° 7’32.63″W) and took out at the Marañon confluence 160 km downstream  elevation 355 meters GPS coordinates 5°30’42.37″S, 78°33’6.40″W). Boating through the border was not an easy task since the transition point from Ecuador back into Peru passes through a canyon with no customs/immigration checkpoint. On our trip we were able to take care of all passport details prior to putting on the river. This was done at the Balsas border crossing located at Balsas Peru on the Rio Canchís (tributary of the Rio Chinchipe.) 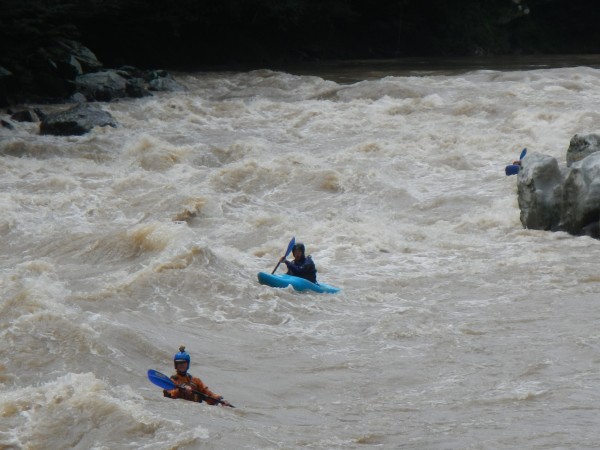 In February 2014 we had a flow of approximately 2000 CFS at the put in. We started on the Rio Numbala which parallels the Rio Palanda and is accessed by taking a road 8 km from town of Palanda to Puente Numbala. Both Rio Palanda and Rio Numbala can be used as put ins. They join 15 km downstream and form the Rio Mayo which then flows 33 km to the Peruvian border with about twice the flow as found at put in. Here the Rio Canchís joins and the river´s name changes to Chinchipe. The 48 KM stretch from Palanda to the Canchís confluence is all boat scoutable read and run class 4.. (note 6 km upstream of the border there is a bridge which would allow for days runs within Ecuador)

On our trip we started day 2 camping near the border and moved downstream to a ferry crossing at a town called 7 de Agosto (confluence with Rio San Francisco). Next town was another ferry crossing 29 km downstream at Puerto Chinchipe then another at Puerto Naranjo 4 additional km downstream. At this point a large debris flow had entered the river in year 2000 and created the only class 5 rapid on the river which we called Naranja.. One km upstream of the Naranja rapid was a fun class 3-4 roadside rapid. This rapid would be ideal put in for a day run. 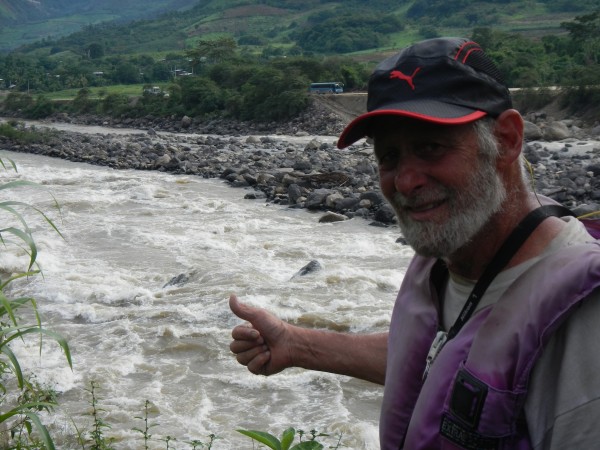 Ira scouting for a raft line on Naranja rapid

Our day three began at a beach camp we found below Naranja Rapid and had lots of fun class 3 rapids. 15 km downstream the Rio Chorinos entered on the left and one km below that was ferry crossing at Puerto Ciruelo. This would be a good take out for a single day run starting just above Naranja. We reached this point mid day and continued several more hours down relatively flat water to where the Rio Tabaconas entered on the right. There was another ferry crossing nearby and a small community. 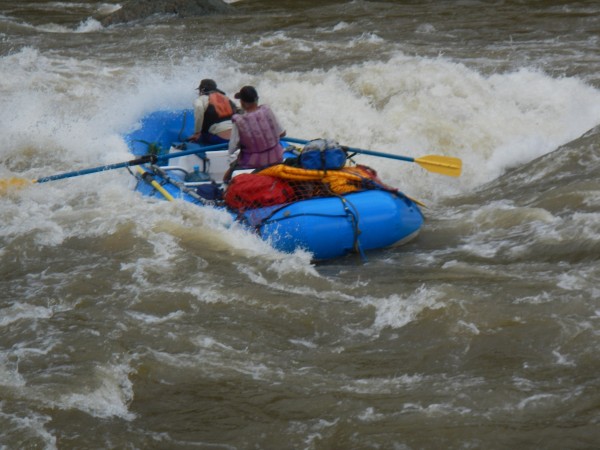 On our fourth and final day we reached Puerto Guayape 15 km downstream which was the final village along the Chinchipe. After four additional hours of mostly flatwater paddling we reached the Marañon confluence. 1 KM downstream on river right is a ferry crossing called Retama and from here one can walk up to paved road and find a vehicle for a ride to the close by towns of Bagua, Jaén, etc

Logistical note: Jaén is probably the best town to start a trip from. There are lots of buses serving Jaén from the whole north coast of Peru. Vans and drivers can be found to head to Chinchipe put in or other nearby rivers which include Rio Tabaconas, Chorinos, Chunchuco, Huancabamba-Chamaya, Amojú, Uctubamba, Callayuc, Chotano, etc. The roads in and out are mostly paved.

In Jaén time permitting visit a small, cool, private reserve called Gotas de Agua which was started by Luciano Troyes who came on our trip http://www.conservamospornaturaleza.org/area/gotas-de-agua-i/ 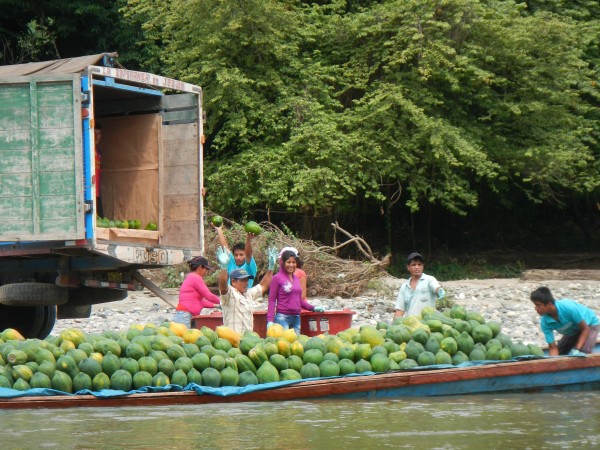 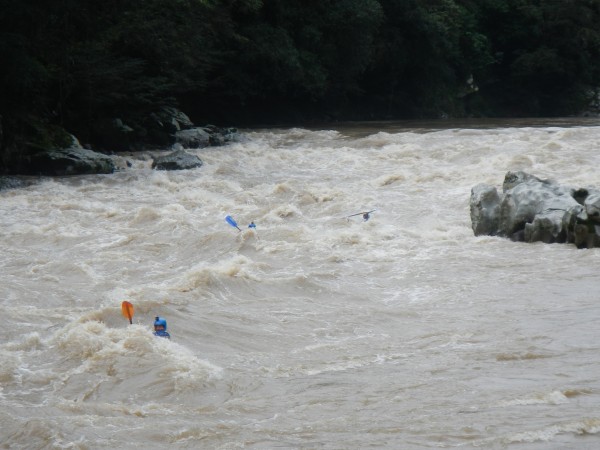 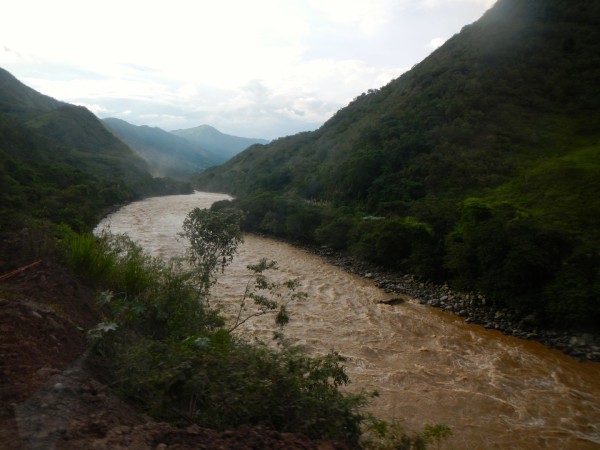 View of Rio Palanda Put in 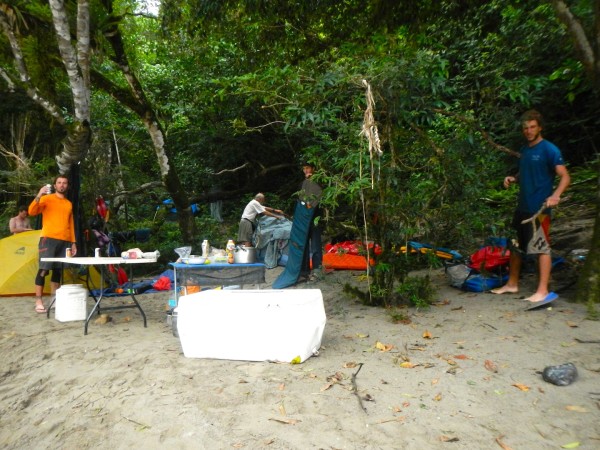 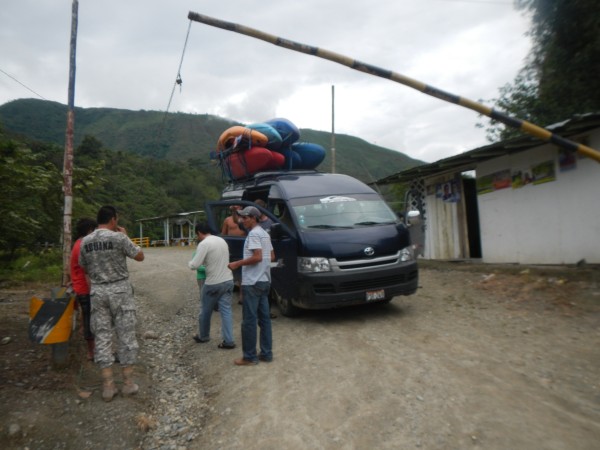 View of Rio Palanda as seen from road 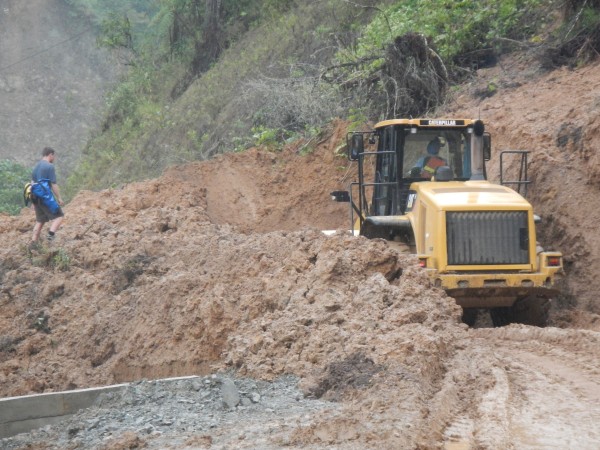 Landslide blocking road to put in near Palanda Ecuador 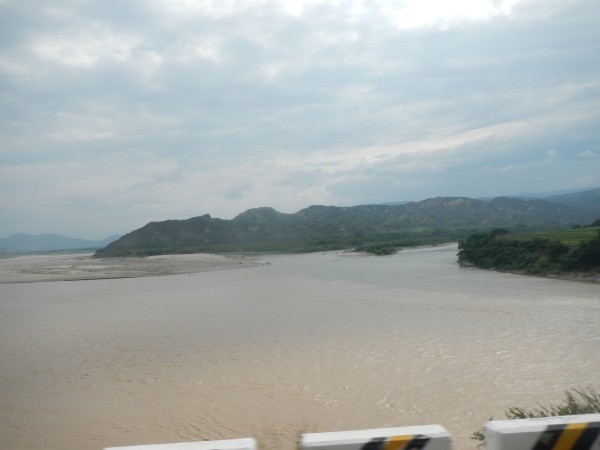