The Rio Sonches is a steep-walled, high jungle adventure in the North of Peru. The run originates in the highlands of the Department of Amazonas and for the first 50 km follows the Chacapoyas-Mendoza road system. This upper stretch is relaxed, roadside boating and would be a good high water alternative. The gnarly stretch lies only ten km below Chacapoyas where the river enters a 1000 meter deep (3500′) steep walled canyon. Although this stretch is only 18 km long expect to take a least 3 days. Arduous portages and steep boulder chocked drops make this a class 5 commitment. 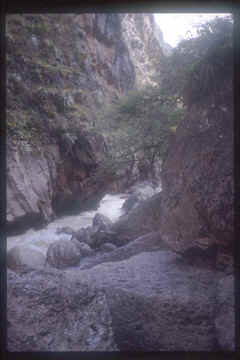 The ideal time to run the river is from May to October when flows average less than 500 CFS. The water source is rain and even though this time of year is the dry season, there exist many periods where several days of precipitation fall in a short time frame. High water in the canyon would be suicidal and wet rocks would make the already difficult portages epic. Even minor amounts of precipitation change the color of the river from a tannic black to a chocolate brown. If you sense rain in the forecast do not enter this canyon.

The put in is easy to reach from Chacapoyas (elevation 2335 meters) by following a 10 km descent on the winding road to Mendoza. Immediately upon leaving Chacapoyas you will descent into the Quebrada Santa Lucia and views will begin to appear of the Sonches River far below. After crossing several smaller Quebradas you will finally come to  a point where a side road can be taken to the river’s edge. This lies just below Quebrada Opielel at 1865 meters.

This point is obvious as a tube descends from the opposing mountain delivering pulverized coal from the highlands.

The first km of boating is incredibly steep with over 50 meters of drop in first 800 meters for a gradient exceeding 60 m/km or 300 FPM. We had only three short portages in this section on our first descent in May of 2002. After the steep pitch the river mellows to class 4 and enters the bowels of the canyon. Day 1 ends with a huge landslide entering from river right at Quebrada Pana. Cliff walls on the left make the right side the only option for a portage and the final 150 meters must be run as the right wall cliffs out. A good camp can be found below on river right.

starts with meandering flatwater but as the walls of the canyon begin to tighten the gradient really takes off. A several hour portage is reached which involves slugging boats up and over boulders and eventually up a cliff face. The portage ends with a mandatory seal launch off a limestone cliff ledge and a difficult to scout class 5 rapid. A beautiful camp can be found below this point on river right.

Day 3 starts like day two with some meandering flat water but quickly reaches a gut wrenching 3-1/2 hour portage which involves hauling boats up cliff faces into the jungle and back down to the river several times. After the portage the Rio Yurumarca enters and the final 5 km of the trip are excellent class 4 rapids with no portages and everything is boat scoutable.