The Vilcabamba is Peru’s newest “CLASSIC”. The River lies within an amazing valley in the Department of Cuzco. The river is born in the Cordillera Vilcabamba where it begins its journey to the Urrubamba. The scenery is that of high jungle and the whitewater is spectacular.

The river can be run starting high at the Inca ruins of Vilcabamba elevation 2850 meters. From here the upper stretch runs to the swinging bridge above the town of Oyara (KM 28). Per Juanito Ugarte this low volume stretch is a definite two day minimum stretch.

Day 1 on the upper stretch begins in town of Huancacalle and soon enters the fits canyon they named “Canyon de la Sirena”. The second canyon is harder, pool-drop class 5 and reminds Juanito of the Palguin in Chile with several waterfalls and channelized rapids.

As the canyon opens the character of the river becomes continuous class 4-5 until the next village below Lucume. (possibly called Yupanca). From this point the river gets ultra continuous class five with boulder strewn rapids and some nasty sieves and portages. It reminds Juanito of the Puesco run in Chile at high flows. At the swinging bridge of Oyara is an easy takeout and cold beer up in town. October 22, 2005

The town of Oyara (estimated elevation 1650 meters)  is also the put in for the middle stretch of river. On October 26 we put on at this point and had approximately 450 CFS of crystal clear water. Within 1/2 KM two tributaries simultaneously bumped up the flow to 700 CFS. We boated to KM 22 and took out a side creek and hiked up to the road. The boating in this stretch was mostly read and run class 4+ and unlike most rivers was actually smalled than it appeared from the road.

In mid November of same year Damen Millar and Nate Elliot put in around KM 22 and ran the Lower section of the river to its confluence with the Urrubamba (estimated elevation at takeout 1100 meters). Nate describes the run as follows:

Km 22-km 15 was good continuous class V. Its bigger than it looks from the road. Around km14, where the giant wall rises from river right, the river  drops into some more serious stuff. The entry rapid is a 20 foot waterfall off the wall over a huge hole. Directly below  the falls there are 5-6 more class V-V+  rapids before you hit the box canyon.

There are two unportagable, scout from the road 500′ above  rapids in the box. Luckily they went. You can see the box from the road. It is 1-2km above the bridge at km 12 or so. I think we left most of the really serious stuff around KM8-9. There are more good rapids after that but your through the hard stuff. 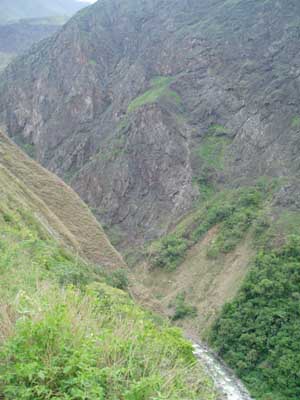 Click here for a topo map – MACHUPICCHU.PDF 1.72 MB Topo maps are in Adobe PDF format, you will need Adobe Acrobat Reader to view. CLICK HERE to download a free copy.